My interest in railroads piqued, but still fixated on the now submerged town, I reached out to a descendent of Colonel William James Rushton, a highly respected Alabamian involved in many local industries, thinking there may be a connection.  Though Col. Rushton had ties to the Power Company and several railroads, there was no connection to the town of the same name.  Fortunately, James Russell, a fisherman of Lake Mitchell since the late 70’s, shared the same interest in the town.  He recently contacted me and I provided what little information I had.  Feeling a bit like Tom Sawyer, with Rushton being my picket fence, I sat back while James went to work. In short order, this is what he found.

The book Notable Men of Alabama: Vol. 2, by Hon. Joel Campbell DuBose, was published in 1904.  The date is important because Rushton didn’t start to appear on Alabama maps until this time.  On pages 346-349 of this volume, James found the story of William White Wadsworth.  Born in 1841 near Prattville, Wadsworth suffered a debilitating injury to both wrists, which led to his being rejected for service in the early part of the Civil War. He persisted though, enlisting in the Confederate army, and had some fascinating experiences through the remainder of the conflict.  One of these was, as a prisoner of war, when he grabbed the reins of a Union captain’s horse and rode off in a hail of bullets to make his escape.  After being wounded three times during a raid in 1865, Wadsworth returned to Autauga County, where he became successful in agriculture and the saw mill business.  To quote DuBose, Wadsworth “owns one of the largest sawmills in the State, located in Chilton county on the Coosa river.”  Furthermore DuBose writes, “He has a railroad connecting his mill with the Louisville and Nashville railroad, and a narrow gauge road to bring timber to mill from the woods.”
For our interest, DuBose further stated that Wadsworth maintained a commissary at Rushton.
So there it is.  Where the name Rushton came from has not yet been discovered.  But as I sit back and relax, you can rest assured Mr. Russell is on the hunt for more details about the town and will undoubtedly uncover them.   Thanks James!

Rushton Revisited
William W. Wadsworth, as you may recall from the article above, was largely responsible for the founding of the town of Rushton. Wadsworth, who later became known as the “Timber King of Alabama”, was born Oct. 17, 1841, near Prattville. He served as a scout and sharpshooter in the 21st Alabama Infantry during the Civil War. Wadsworth received multiple wounds throughout the war, including losing a finger in one skirmish. In 1865 in North Carolina he was shot through the body, the bullet passing near his heart, while another round shattered his left elbow, disabling him for life. Nevertheless, he survived the war and went into agriculture and the sawmill business. The mill he built at Rushton, where Blue Creek flowed into the Coosa River, became one of the largest in the state. It is reported there was narrow gauge rail line that was used to bring timber out of the woods and down to the mill. A second, standard gauge line, took finished products to market via a connection with the Louisville & Nashville Railroad, which was then known as the South & North Alabama Railroad.

William Wadsworth was not content with just his sawmill at Rushton. He maintained a commissary there, as well as at the town that bore his name. He also started a pottery works at Wadsworth and served as the town’s postmaster for 23 years. Wadsworth died in November, 1913, and is buried in a church cemetery there. You can find his resting place by taking Hwy. 31 South from Verbena, then left onto Hwy. 143 S. towards Deatsville & Wetumpka. When you reach the intersection with Autauga Co. Rd. 68, the church will be on your left.

Back to our little town, in 1903 Rushton had its own U.S. Post Office. Having a post office back then quite literally put your town on the map. A 2-cent stamp was usually sufficient for general mail, but if you needed to correspond with someone overseas, you had to hand over to the postmaster a Liberty head nickel or 5 Indian head pennies. By the way, the name of this latter coin is actually a misnomer. According to Whitman’s “Guide Book of United States Coins”, the person represented was not a Native American but Miss Liberty wearing a headdress. However you paid, five cents was far cheaper than taking it there yourself. Plus it allowed for more time on the job at the Blue Creek Lumber sawmill, or farming, mining, or hunting and fishing along the as yet untamed river.

This last item was found on the genealogytrails.com website under Chilton County Military Data. At the beginning of the Civil War and at the age of 17, William B. Jones went to the community of Chestnut Creek and enlisted in Company B of the 1st Alabama Cavalry. Like Wm. Wadsworth, William Jones survived the war, and the 1907 Census of Confederate Veterans listed him as a resident of Rushton. In 1925 a Confederate Pensioners list showed the now octogenarian Mr. Jones living in Clanton. This move may have been brought on because of his age, but most assuredly it would have happened after the completion of Mitchell Dam and the submergence of Rushton in 1923.

The accompanying map is from May, 1919, and is entitled Duncan’s Riffle Development, Topography of Flooded Area. The solid boxes are structures that will have to be removed, as they are below the darker 352’ contour line. Today this corresponds with the full pool line, which in actuality is about 311 feet above sea level. Also note the parallel lines that indicate the “Old R.R. Bed”, which hugged the northern side of Blue Creek. Those of you familiar with the southern part of the lake will recognize the narrow gap that now leads to Blue Creek Marina.
​Original map courtesy of George Jackins. 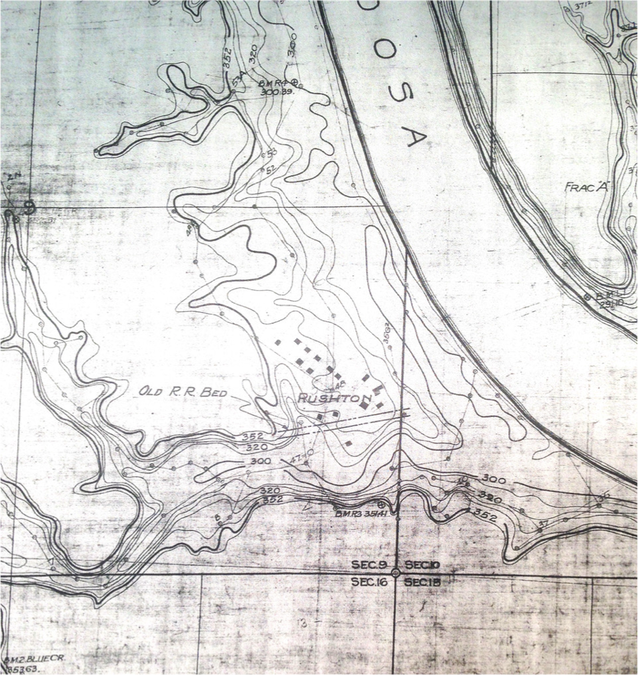