Rushton was located on the banks of the Coosa River at the mouth of Blue Creek. The story about Wadsworth in Notable Men of Alabama: Vol. 2, states that “He has a railroad connecting his mill with the Louisville and Nashville railroad, and a narrow gauge road to bring timber to the mill from the woods”. Unfortunately, there is no mention of where Wadsworth’s line tied into the L&N line. There may be a clue found on a 1915 Ala. State Highway Commission map showing a proposed system of trunk roads in the state. Trunk road is not a common term in the U.S. now, but Wikipedia says it was generally used to denote a major road connecting two or more cities, ports or other places and was the recommended route for long distance or freight traffic. This particular map shows a proposed 7  1/2-mile “macadam, gravel or chert” road leaving Verbena and going directly to Rushton, obviously an indication of the latter town’s importance. The type of road described doesn’t sound like much, but of the 5 classifications of roads in the state at the time, that was the best there was. One might think the trunk road would closely follow an already existing rail line, that is if Wadsworth’s spur tied in at Verbena. But this is just a guess. Whatever the case, this trunk road was never built. It is just as well, because in eight years Rushton would be going under, literally.

Moving forward a little in time and drawing from the 1920 census, we find the population of Cooper was 1,492, with nearby Verbena having a slight edge with 1,929. According to the book Putting Loafing Streams to Work by Harvey H. Jackson III, in November of that same year word started circulating in Chilton County that Alabama Power was going to build another dam on the Coosa River at a place called Duncan’s Riffle. The building of the dam would require the laying of a spur line off the L&N mainline to the construction site. Knowing what a boon this would be for the local economy, both of the aforementioned towns lobbied for the spur line. Much to the disappointment of Verbena, Cooper was selected as the tie-in point.
We now return to the present, almost. Just off Hwy. 31 in Cooper, on County Road 24 near Chestnut Creek Baptist Church, is a nice house with flowers generally in abundance. Some of the perennials are found growing in an old rail depot baggage cart in the front yard. Deducing this cart may have come from the long gone Cooper depot, but most certainly having a rail connection, one morning back in the summer of 2014 my wife and I stopped by for what could be termed a “cold call”. Our reception was anything but. Mr. Cagle didn’t elaborate much on the baggage cart, but he did tell me of a gentleman he knew named Boswell that had part of the old rail bed on his property, stating that Mr. Boswell used part of the old railroad embankment to make a pond for his cattle. Mr. Cagle gave me directions to Mr. Boswell’s place, a little further up C.R. 24 towards M&H Grocery.

Several months passed before I had a chance to call on Mr. Boswell. When I did, I interrupted the midday meal, but nevertheless was graciously invited in by Mrs. Boswell and offered sustenance. Sadly, I had to decline, having just downed some fast food back at the 205 exit. Following lunch, Mr. Boswell drove us down through his gently sloping pasture and showed me what was left of the rail bed. Looking to my right, due west, about two hundred yards away was the embankment and pond. However, directly in front of me and going towards the east was a raised mound. It was a few feet higher than the approach, but once on the flat top, the other side dropped off more substantially. About 75 feet to the east there was a deep gap or break in the mound where one could easily see a change in the upper strata, the cinder-type material commonly used for rail beds long ago being plainly visible. While taking all this in, Mr. Boswell mentioned that his wife had suggested using a metal detector on the ground, and that was all I needed to hear. Still, it would be the latter part of May 2015 before that came to pass. But good things sometimes do come to those who wait
After saying hello and making introduction to our hosts, we four took up our tools and started walking down to the pasture and our goal. As we neared the rail bed, I inadvertently kicked something with my steel-toed boots and lo and behold, the first spike was found lying exposed on the ground. With Nate using the detector and Noah doing the digging, it wasn’t long before we found another spike and a couple of broken bolts. These bolts were substantial in thickness, and would have also been in length when new, as they had to pass through a steel plate known as a fishplate, through the side of the rail, and then another fishplate, before being cinched down with a lock washer and nut. This was how the rail sections used to be joined together, end to end, with the traditional spikes holding the rails to the crossties. All told we found four spikes, five bolts (all broken), several lock washers, and one 4-sided nut. A good day, by relic hunting standards. 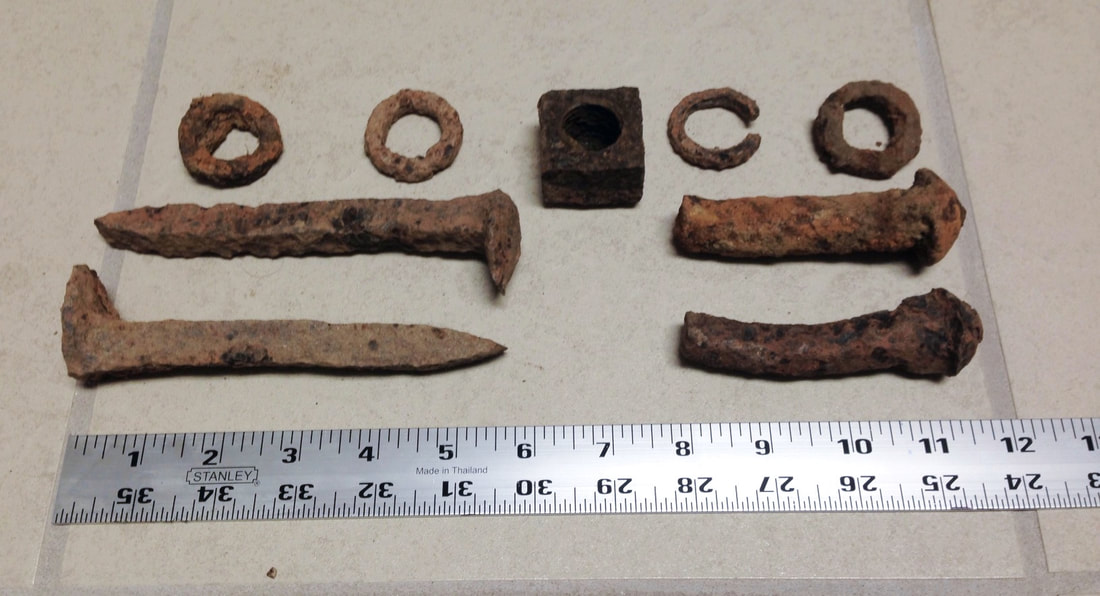 Now for some unanswered questions. Was this the spur from Cooper to the dam construction site, or to the sawmill in Rushton, or perhaps did it serve both, at different time periods? Calling logic into play, if Wm. Wadsworth had a line coming off the L&N main in Cooper and going to his sawmill, it would stand to reason Alabama Power could at least use the western portion of this spur before diverging somewhere east of present- day Co. Rd. 59, going south of the ridge bordering Blue Creek and on to the dam site. Assuming the Rushton sawmill was still operating, most or all of the work there would involve cutting up timber for use in the dam’s construction, so no lumber would be going outbound to interfere with the incoming construction material trains. This would also mean a substantial cost savings to the Power Company, having to lay much less track. On the other hand, the Power Company’s choice of where to come off the L&N line was apparently not a foregone conclusion, as one would expect if a line was already in place for at least half the distance to Duncan’s Riffle. There is another hint that the construction rail line was independent of any other. On the official Alabama Power survey map dated May 1919, fifteen structures were indicated at Rushton, but most telling was the surveyor’s dotted lines and notation “Old R.R. Bed”. Whether this was the narrow gauge line or the full size spur, “Old” and “Bed” are indications it wasn’t in service anymore. Mr. Wadsworth died in 1913 at the age of 72. Maybe by the time of his death or shortly thereafter the sawmill had ceased operation.
Back to the section on Mr. Boswell’s property, I realize that more investigation is needed. However, because we found only broken bolts and even fewer spikes, I feel certain this line was definitely the one used to take construction material to the dam. It is known that following Mitchell Dam’s completion in 1923 the line was taken up. In about a year’s time Alabama Power would be building another dam, this time on the Tallapoosa River, and a spur line would be needed there. So up came the rails, fishplates, and as much of the other hardware as was fit to use again. Broken bolts would have been left where they lay. In light of the fact that over 90 years has passed, I am quite pleased to have found anything at all. So my thanks go out to my relic-hunting compadres, but especially to Mr. & Mrs. Boswell for their kindness and hospitality.