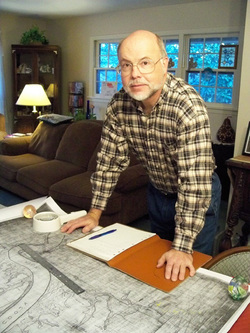 Chip Gates studies old maps.
Please forgive me if I seem to be fixated on maps, but it's rather difficult to get first-hand accounts of the ways things were 70+ years ago.  I have looked at several maps of our lovely lake and it doesn't take long to realize there are inconsistencies between some of them, especially in place names and site locations.  That said, let me tell you about one map in particular.

This map measures roughly 7 & 1/2" by 10", is on very dark blue paper, with white outlines and lettering.  There is no legend or scale associated with the map, but the representation of the lake from just below the dam, to just below Hatchet Creek, appears to be fairly accurate. The northern-most portion of the lake before the map cuts off appears to be Bird Creek, though there is no label to indicate this. The few roads, distances given, and other nomenclature are hand written, and very neatly at that. The 10" dimension runs from left to right, with South at the bottom.  The left side is torn, but a 4-street Clanton is shown in the NW corner, and a 5-structure Verbena is in the southwest corner. 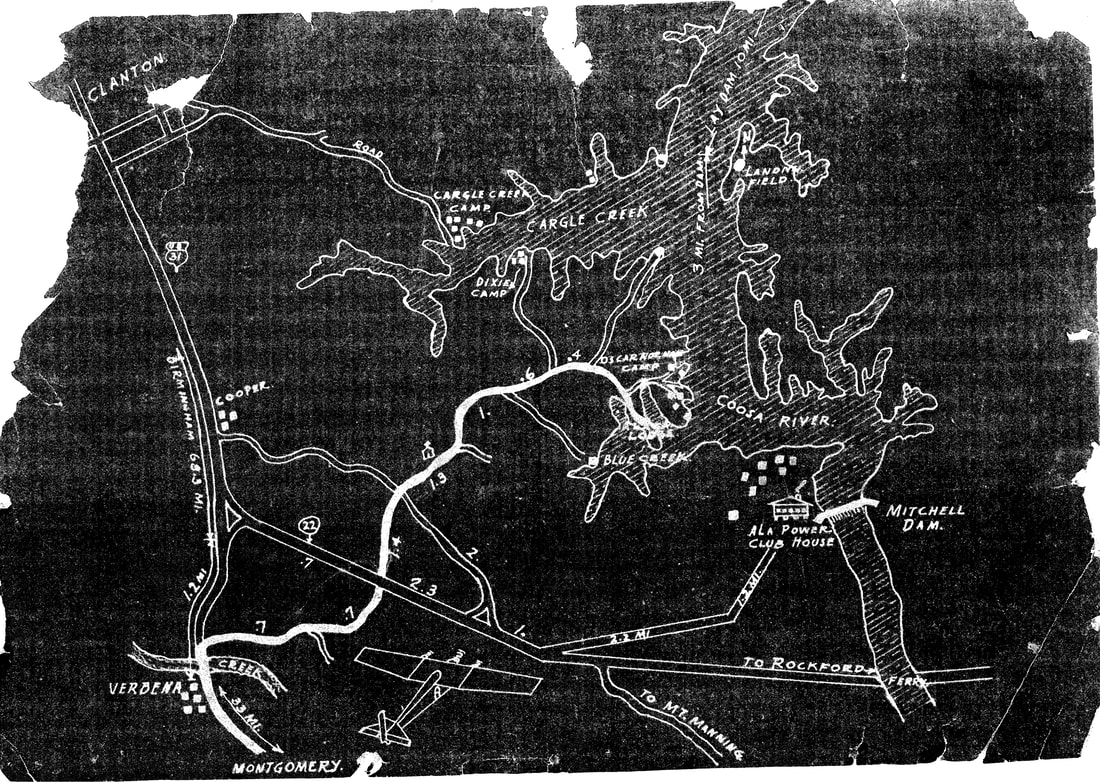 One of the first things of interest in the bottom right (SE) corner is where Hwy. 22 crosses the river.  Or would, as the map shows "FERRY".  I checked online and then received confirmation from a nice ALDOT employee that the Hwy. 22 bridge was completed in 1958. So the map obviously predates that.  Adjacent to Mitchell Dam is a nice drawing of a raised building with smoke coming from the chimney labeled "ALA POWER CLUB HOUSE", and above that are 8 little squares that apparently represent cabins.

Moving north, and most likely the reason for this particular map, you'll find ALAGA LODGE.  I believe this was the intended destination because, of the ten or so roads shown on the map, those leading from Hwy. 31 in Verbena, including present-day County Roads 59, 542, and 547, have been darkened in.  Distances between crossroads along C.R. 59 are given, but coming up Hwy. 31 from the south of Verbena is "33 M" and there the map cuts off.  So 33 miles below Verbena and definitely "back in the day" some intrepid explorers must have headed north for a big time at the Lake.

Still on the Chilton County side of the lake and just above Alaga is a riverfront location called "OSCAR NORMAN CAMP". The printing is a little fuzzy on the last name but my wife and I both came to the conclusion this is what it said.  Continuing northward, and located about where G.R.A.C.E.S. Marina is you find "DIXIE CAMP". Across Cargle Creek (the map's spelling) from Dixie and a little to the west is "CARGLE CREEK CAMP".   There are several cabins(?) illustrated here as well a road that leads almost straight to Clanton.

Our last item of note from this piece of history takes us across the lake from the mouth of Cargle Creek.  On a narrow elongated strip of land, the northern-most part jutting out into the entrance to Big Airplane Slough, is a North arrow and the label "LANDING FIELD".  Not wanting to spoil the surprise, I neglected to mention at the bottom center of the map is a representation of an old Ford Tri-motor airplane, and it's apparently winging its way north to this strip. According to Shan Paden, whose place is at the southwest point of Cargle (Cargile) Creek and the river, this field was used during WWII for practicing take-offs and landings.  Now this is just supposition, but my guess is this was probably no more than a grass field with no facilities, with the planes coming up from their base in Montgomery.  If anyone has any knowledge about this, please send me an email to gatesestate@bellsouth.net
​