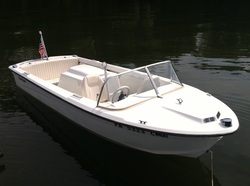 It was New Year’s 1973. The Lake Mitchell Ski Club gathered at the lake on December 31st and partook of warming beverages and friendship.  At the stroke of midnight five hardy souls celebrated the New Year with a short ski ride. The skiers included Bo Warren, Gram Esdale, Jimmy McCormick, Susan Speaks and Mike Smith.  With great boat driving by Bill Randle, the skiers were pulled with a dry start from the McCormick’s pier in Cargile Creek.  Wearing only bathing suits and ski belts - no wet suits were allowed - the skiers took a short run toward the end of Cargile, turned around and returned to land dry at the Randle beach – or at least some made it in dry.  Poor Susan fell and Bo made a heroic effort to save her from the freezing water.  It was cold - the air temperature was in the low 40s. Of course water skiing at night is illegal, but with the help of the water patrolman Bill Attaway, the ski club obtained a permit from the state to make the run. Ed Warren (Bo's father)  wrote a verse about the outing that was published in the Birmingham News and in the American Water Ski Association magazine.  After that night, several of the group decided to ski every month of that year, which they did.  February was cold!

There were not many inboards on the lake in the 70s and early 80s, but each had its own sound. You learned whose boat was out on the water just by the sound. Mike Smith's Correct Craft was likely the loudest since the factory used copper tube rather than rubber hose for the exhaust out of the boat, which acts like a megaphone. It is even louder inside the boat.

The story of the Lake Mitchell Ski Club wouldn’t be complete without revisiting that most famous Midnight Ski. In late 1972 and with New Year’s rapidly approaching, some (fool?) hardy souls decided they wanted to be the first in the nation (and perhaps the world) to ski in 1973. You must admit it would be a catchy phrase and a great tee shirt – “First to Ski in ’73.”

However, skiing after dark was against safety regulations so special permission was needed. By all accounts Lake Mitchell’s own Water Safety Patrolman Bill Attaway was as fine a person and officer as there was, but this request went above his pay grade. Fact is it went to the top. I reached out to the Marine Police on their website and received a quick and cordial response from Deputy Chief Matt Brooks of ALEA’s Marine Police Division. Chief Brooks said in 1972 the Marine Police was a division of the Alabama Department of Conservation and Natural Resources. Tom Shackleford was the Director of the Marine Police and, as such, held the rank of Colonel. As the Colonel, he would have been responsible for issuing marine event permits in the state for such as the New Year’s ski. As we know now, Colonel Shackleford approved the request. To make sure all went well Patrolman Attaway, with his wife and family present as witnesses, was on duty that night and in his patrol boat.  As Bo remembers, the “First to Ski” was also authorized by the American Water Ski Association.

Mike Smith had this recollection leading up to the midnight hour. “We all gathered at the lake on December 31st, partook of warming beverages and friendship. It was cold; air temperature was in the low 40’s.”
At the appointed date and time (one minute after midnight, January 1, 1973), several intrepid souls of Lake Mitchell’s Ski Club were poised to make history. They gathered on Jimmy McCormick’s pier and prepared to leave in two flights, each with 4 skiers. They would leave the dock in the dry, make a quick run out towards the mouth of Cargile Creek, and return. Any skier who went down away from shore could be picked by Officer Attaway before hypothermia had a chance to set in. Right next door to the McCormick’s was Bill and Bobbi Randle’s place. Jimmy recalls “Bill Randle drove both rounds of skiers. In fact it was his beach next door to me that we landed on. That was back when the water level would fluctuate, and when the level was down Bill had a nice wide beach for us to aim for. We put a light at the corner of his pier to make sure we didn’t hit it as we angled into the beach.” Jimmy gave credit to Bill “who knew exactly how much throttle to give so none of us got wet above the knee when we took off from the pier.” Bo added with this admiration of Bill’s skill at the helm, “Bill Randle was always our turn to driver, for kites, jump, show skiing, all around .... He had the ability to watch the skier and help us if he saw we were having a difficult time. An all-round good guy. We all miss him daily.” This last line refers to the later tragic loss of Bill Randle in a traffic accident.

With all parties now set for the event, Bo takes up the story. “After the New Year was declared at 12:00 midnight the first flight of four skiers left the dock in front of Jimmy McCormick’s house. No wet suits were allowed, we were tempered and tough back then. The first wave left with a dry take off and returned to a shallow water landing. The second wave left with the only mishap being when Susan Speaks fell coming back to the pier. I did dive in and escort her to the bank to a nice reunion with club members.” Bo continued with “The members I remember taking part were Jim McCormick, Mike Smith, Gordon Robbins, Chris Speaks and Bo Warren. The girls were Dale Warren, Bobbi Randle and Susan Speaks. We probably would have had more skiers had I not made the silly rule about regular bathing suits only.” Hind sight is usually 20/20, and since I was not involved in that night’s frigid escapade it’s easy for me to say the “swim suit only” rule was a sound one. A wetsuit allows water in to be warmed by the body and thus provide some insulation, or a dry suit, which is as it sounds, remains completely dry against the body to provide protection from the cold. Unless someone is a scuba diver, most don’t have one of these outfits in their closet, so it wouldn’t be fair unless all participants were able to access one. Besides, the long standing tradition of a New Year’s “Polar Bear Swim” always features folks in swimsuits and maybe a swim cap, and nothing more.

Mike succinctly summed up the run with this, ”We left from the McCormick’s pier in Cargile Creek with a dry start, no wet suits were allowed, took a short run down toward the end of Cargile turned around and landed dry, at least some of us made it in dry at the Randle beach. Once complete with the run, we were again warmed up with a warming beverage.”  Whatever the beverage was, no doubt it felt good going down.

The preceding observations were made by three of our skiers. But don’t forget there were onshore witnesses, not the least of which was Bo’s dad, Ed Warren. Using the vernacular of the well-known Ed, and drawing from a subsequent Birmingham News article about the event, according to all present “It were cold!” Ed said “the club had already decided it would be chicken to use wetsuits” to stay warm, but the skiers who volunteered quickly found “It were cold!” Remember, the plan was to take off dry from the dock and land back semi-dry on a sandy beach. A good plan if it held together. Again, that greatest of all Lake Mitchell’s elocutionists, Ed Warren, reported “Susan crashed on takeoff. She swam ashore like a frightened dolphin. At the dock she said, ‘It were cold’.” Ed’s timing of Susan’s dunking differs from his son’s, but there’s no question Bo was her knight in shining, ah, swimsuit, who helped bring her to shore. Also on the return Tommy Robbins didn’t have enough momentum to make the beach and sank. Ed Warren said Tommy came in, “goose pimples and all”, saying, you guessed it, “It were cold!”

One final note of interest from Mike Smith. “Beginning with the midnight ski, several of us vowed to ski at least one time every month of that year. Not sure who all made it but I know Bo and I did. And yes, in February, March and April, as Ed Warren put it, It were cold. It were cold for the folks in the boat also,” he concluded.
Foolhardy? Perhaps. But poems are never written, songs are not sung and stories are never told about those that sit in front of a warm fire drinking eggnog as a new year begins. No, the accolades go to the adventurists who share their passion with others, constantly trying to improve on their craft, and sometimes dare to try something that hasn’t been done before.