The Killingsworth Family Comes to Fixico

​The Killingsworth family comes to Fixico
By Chip Gates, H.O.B.O. Historian
This introduction is from an article by John D. Fair of the University of Texas as found in the Encyclopedia of Alabama.  William Stockham came to Birmingham in 1903 and founded Stockham Pipe Fittings, later to be renamed Stockham Valves and Fittings. Initial products included streetcar wheels, window sash weights, manhole covers and iron pipes. The company grew rapidly, partially due to the benefits it offered its employees.  As Mr. Fair wrote, “Stockham provided not only housing and health care for its workers but an on-site YMCA, a night school, annual picnics, a Christmas banquet, sponsorship of baseball, basketball, and bowling teams, and even food, clothing, and coal during the 1930s. These benevolent acts also had the self-serving effect of bonding the workers to the company …”  This bond  existed between the co-workers as well, which ultimately led three of them, Milton Huffman, Hubert Merrill and Walter Killingsworth, to each build a small home away from home on Fixico Creek.

If you are familiar with where Little Joe’s Fishing Camp used to be, you’ll know all the cabins were on the left or north side of the slough as you entered from Weogufka Creek.  The majority of these small cabins were built so that their water-side was resting on tall posts right at the water’s edge, or out over the water in some cases.  This close proximity to the water would ultimately lead to their removal, but that wouldn’t take place for at least 60 years.  As you entered the slough from Weogufka Creek back in the 1940’s and 50’s at the bend you would first come upon Milton Huffman’s new cabin, then a couple of empty lots, followed by Hubert Merrill’s place, a cabin owned by a son/step son of  Merrill named Luther, several more empty lots, a cabin whose owner’s name may have been Smotherman, then Walter Killingsworth’s humble abode, followed by Huffman’s original cabin, some more empty lots, and then a cabin owned by an Anniston police officer named Ike Cleghorn. Beyond these cabins were a couple of lots, 3 small cabins owned by Little Joe, and finally Little Joe’s itself. Bear in mind that a lot in this case was not a lot, as in a large area, but more like postage stamp size. Step out of the front door and you’d practically be in the middle of the dirt road that led to the cabins and ended a couple of hundred yards away. This is probably why so many of the cabins had the main entrance on the side.  Now here is an interesting bit of trivia. Across the road and about 50 yards up the hollow from the Huffman’s new cabin was a well and pump that supplied water to the cabins. The cabin owners installed and maintained this miniature water works themselves.

In the accompanying photo, you’ll see that Little Joe’s watering hole and domicile was a relatively large and long wooden structure built out over the water. When you entered there was bar off to one side and a large open space for dancing or whatever.  Adjacent to the open area and further out over the water was Joe and Mildred’s bedroom, and behind that was their son Jo-Jo’s bedroom. Beyond this and getting close to the opposite side of the slough was a large covered porch and storage area. So like many a small business during this time period, the proprietors lived on site. 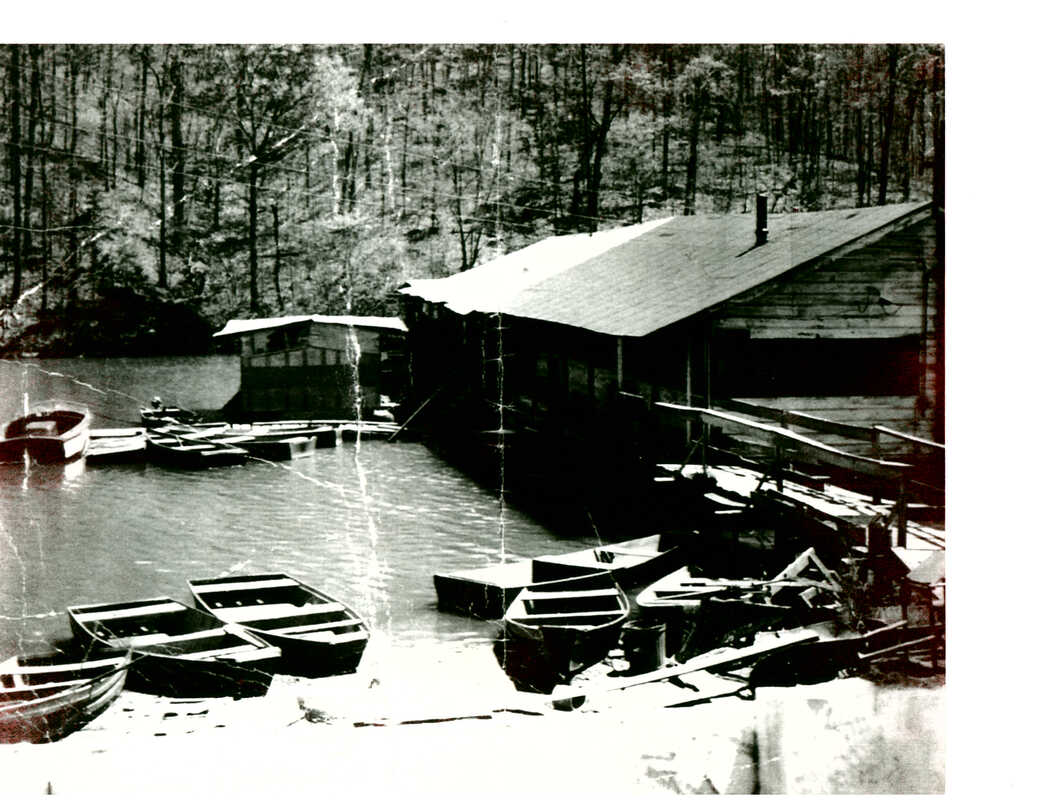 Walter Killingsworth learned of this little spot of heaven from co-worker Milton Huffman and built his place in the mid-1940’s. Setting aside his no small feat of personally building the cabin, think of the logistics involved back in the day, traveling some 80 miles from a home in East Lake, winding down the Florida Short Route (now Hwy. 280) to Sylacauga where the family usually stopped for dinner (a grilled cheese sandwich with No Pickles for son Bill), then on through Weogufka and down some dirt tracks that Coosa county offered up as roads to finally reach the cabin.  The preceding run-on sentence is used to try to emphasize what was the norm for many folks who didn’t live on the lake full time, but enjoyed their time there so much to still make the journey. After all the investment of time and effort Walter kept the cabin until the late 1960’s. 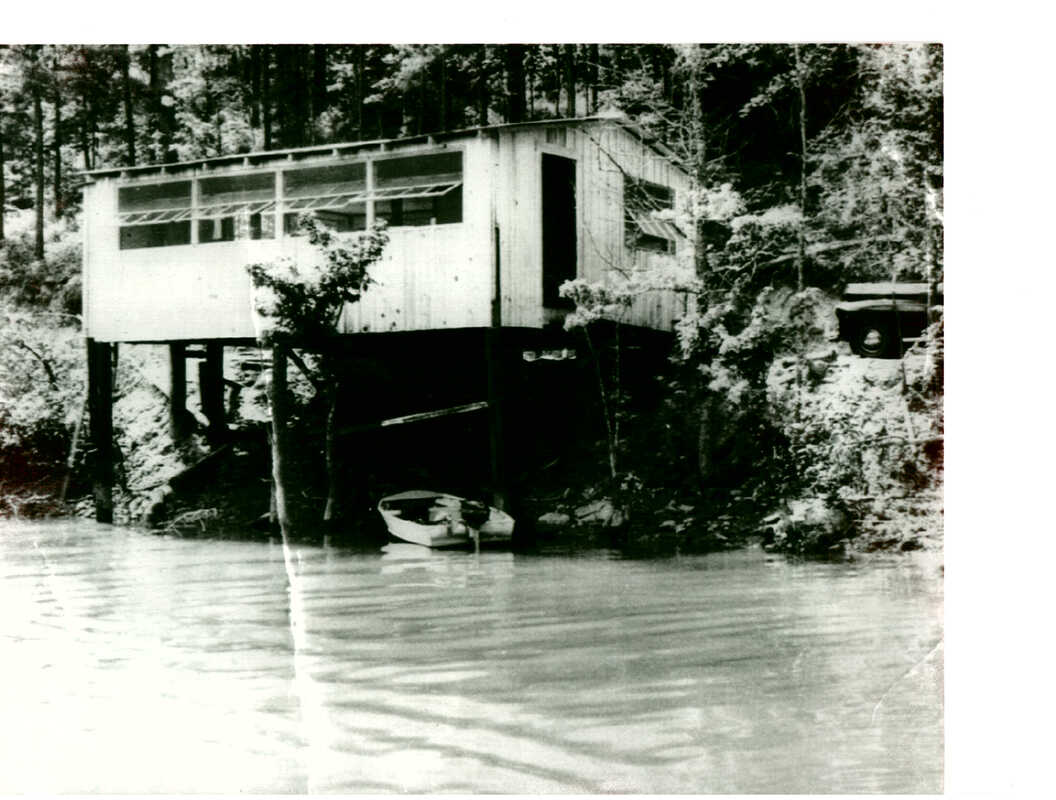 ​Walter was obviously very talented in working with his hands because after finishing the cabin (Is a lake place ever truly finished?) he went on to build several boats and even water skis back in his garage in East Lake.  Walter’s son Bill, our source for this story, said the design his dad used for the boats was based on one from a Birmingham boat manufacturer he believes was called “Barry’s”. The standard woodworking tools of the day were used: various saws, sanders, glues and clamps.

Bill said their extended family and friends spent many, many weekends and vacations at the cabin until his graduation from high school in the late 1950’s.  An only child, Bill had plenty of time for boating, fishing, and traipsing through the nearby hills. He learned to water ski behind a 15 horsepower Evinrude, which undoubtedly took some time to master just getting up.  Water skiing was very much a big deal for the kids that got to come along with the Killingsworth’s, many taking their first lessons from their hosts.
When asked about seeing any old mining structures in the woods, Bill recalled seeing the remnants of an old dam across Weogufka Creek just upstream of the rapids. One day he and a friend were wading across the rapids when a snake floated by.  Bill said that he didn’t realize his friend, a somewhat out of shape kid, could run so fast in waist-deep water. A few years later, and with a more powerful 35 horse Evinrude on their boat, a teenage Bill and a cousin went up Weogufka to a spot just below the rapids to do some fishing.  While casting they saw a large water moccasin swimming across the creek.  Boys being boys, Bill unthinkingly cast across the snake and gave the rod a yank, snagging the reptile. They were immediately confronted with the question of what to do next, but that was decided for them. The unhappy moccasin realized who put him in that situation and started swimming towards them.  As you may know, water moccasins are born with a nasty disposition and it only gets worse the older they get. The guys didn’t want to cut the line and lose a nice lure so they got the snake close enough to dispatch it with a paddle. This was definitely one of those times not to be up the creek without a paddle. Lesson learned, Bill said. On another occasion, these two fellas happened upon a still in the woods. Again, boys being boys and toting .22 rifles, they shot up the still.  Later, Little Joe’s wife Mildred, having heard of this incident, gave the boys “what for” and said they were lucky they weren’t shot themselves. The still wasn’t the Caudle’s, but Mildred was wise enough to know it wasn’t smart to mess with such things.

Coosa County was officially a dry county at this time, but there certainly weren’t any restrictions on minors being inside the honkytonk at Little Joe’s Fishing Camp. Bill confides that he was aware of the alcoholic beverages served there, but not any hidden stashes of them. He said the liquor, beer and whisky was in their respective bottles and was stored more or less in plain sight in an outbuilding on the property.
Bill also remembers the fish camp boats were parked underneath when not out for rent, including a white Higgins boat named “Dago”. This was not a leftover from the ferry of the same name, nor a surplus landing craft of World War II fame, but a commercially manufactured wooden inboard, perhaps a little more powerful and lighter than the better known Chris-Craft. One time someone who had had a little too much to drink brought Dago in too fast (quite possibly Little Joe himself), taking out a piling or two. Bill said “it was a wonder the whole place didn’t collapse into the backwater”.

​Bill said they knew Little Joe and Mildred Caudle pretty well.  The Caudle’s only had the one child, Jo-Jo, who was a few years older than Bill.  I asked Bill where Jo-Jo would have gone to school, since this was such an isolated part of the county. Originally Bill thought Jo-Jo went to high school in Weogufka, but now believes he went to Rockford.  It is still a mystery where he attended lower grades.
Bill remembers Jo-Jo mainly working around the fish camp, doing cleaning, yard maintenance, and taking trash to the dump. Bill never saw him do any fishing. He does, however, remember Jo-Jo castrating the Caudle’s pigs, “which made enough noise to wake the dead.”  When he recollects these times, Bill can still hear that awful sound in his mind.

One funny story Bill offered was how Jo-Jo had promised a bull frog to one of his teachers. Bill just happened to have one and traded it to Jo-Jo for a Bowie knife.  What happened to the hapless frog is unknown, but Bill still has the knife.

After Jo-Jo graduated from high school, Bill’s dad got him a temp job on an assembly line at Stockham Valve, and Jo-Jo lived with the Killingsworth’s in Birmingham for several months during that time.  Later Jo-Jo would marry a girl from Weogufka and they moved to the Atlanta area where he worked at the airport.  After that contact was lost with Jo-Jo.

​We now find ourselves some 60+ years later in early January, 2019.  The honkytonk is long gone, with only a post or two left sticking up above the water to mark its location.  All of the remaining waterfront cabins from the bend in the slough where the Huffman’s built their second cabin on back to Little Joe’s have been torn down and removed.  Except for a concrete pad or two up on the bank, there is no trace of what was once an isolated but highly interesting enclave on the lake.  The surface has been scratched on this little corner of the world, and the deeper one delves the more fascinating the stories become.  I hope that Little Joe’s and Fixico Creek can still offer up some more tales before they are lost forever.  ​