Chip Gates recounts his journey in the spring of 2013 to the Higgins Family Cemetery. 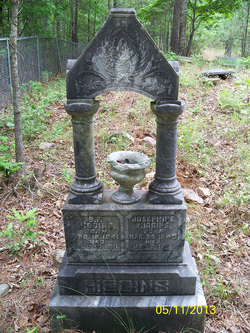 We continued down 121 towards our next destination, the Higgins family cemetery.  We turned left onto Lakeview Road, and opted to see where Scott’s place was first.  It was there we ran into Mark Sullivan, whose home is on Mattress Slough.  Mark kindly shared some of his family’s history on the lake.  We then backtracked a short distance, turning up Poinciana.  A few hundred feet off Lakeview, the road bends to the right. There, on the left, was an old dirt road heading uphill.  Following this on foot for a couple of hundred yards we came to a “T”.  Taking the left part of the “T”, we were almost at once at the cemetery.  Surrounded by a low chain link fence, the grounds were somewhat overgrown.  Scott had mentioned he thought a scout troop had been maintaining the site, but there was no evidence of recent work.  There appeared to be approximately 15 or so graves, most from the 1800’s and on into the early 1900’s.  At the entrance was a memorial stone to Robert Flemon Higgins Jr.  Robert, born in 1925, was the caretaker of the cemetery, apparently until his death in 2007.  The marker notes his ashes were cast upon the grounds there in 2008.
As is often the case in older cemeteries, sadly there were headstones of infants, some nameless, as they apparently died at birth. Those that made it past childhood lived relatively long lives, such as B.F. Higgins (1841-1911), and his wife Josephine (1848-1913).  I’m sure many folks are familiar with the public boat launch where the abandoned Higgins Ferry used to cross the river.  But some may not be aware that there was a Smith’s Ferry that crossed where Cargile Creek flowed into the Coosa River.  On the east side of the river the ferry landed about where Lakeview Road is, and tied in with the old Coosa County Road 1.  So it was interesting to find a grave marker with the name Harriett Jones Smith (1844-1888) in the Higgins Cemetery.  Coincidence?