Warning: The Alabama Antiquities Law prohibits collecting on state property, including along public roads. You may not pick up arrowheads in any of the national forests or state parks. Lakes and rivers operated under the Army Corps of Engineers or Tennessee Valley Authority are also off limits for arrowhead collecting.  Always get the property owner’s permission before hunting on private lands.

With the formalities out of the way, let’s talk about arrowheads you may find around the lake.

Typically larger streams and rivers are generally where you’ll probably find evidence of Indian camps and villages. Unless a free flowing spring was nearby, the Indians would need a consistent source of water that the Coosa River and Hatchet (Ponchishatchee) Creek would provide. Except in times of little rain, Walnut and Cargile Creeks could do the same. Native Americans were smart. Unless a camp was temporary, it and most certainly permanent villages would have been located a safe distance away from the water’s edge to avoid being swept away in occasional floods. So while many places where arrowheads and spear points may have been used are now underwater, don’t discount finding these relics because of the dam and lake, as you will see. 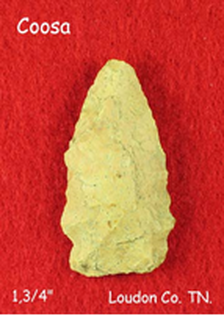 Photo from Mike's Tennessee Arrowheads
On the web is an excellent compilation of arrowheads and where they may be found in our state.       Go to Alabama Projectile Points at www.projectilepoints.net/Search/Alabama_Search.html.

​You will find hundreds of color photographs and the dimensions for each type.
Of the many illustrated, one in particular caught my attention because of the name - Coosa Side Notch.

The authors of the website had this to say: “This point is primarily found in Coosa River region, but may be found into the Tennessee River Valley of southern Tennessee, northern Alabama, and into northeastern Mississippi and northwestern Georgia. Coosa Notched and Coosa Stemmed points are found with Late Cartersville and Swift Creek pottery in northwestern Georgia. This indicates a time frame for Coosa Notched points extending into the Middle Woodland period.  A broad range from 2500-1500 BP is estimated.”
K. Kris Hirst (updated January 25, 2019) added this information: “The initials BP, when placed after a number (as in 2500 BP), means ‘years Before the Present.’ Archaeologists and geologists generally use this abbreviation to refer to dates that were obtained through radiocarbon dating technology.” Hirst goes on to clarify with this: “A major disadvantage of using BP is that the present year, of course, changes every twelve months. Since the BP designation was originally associated with radiocarbon dating, archaeologists chose the year 1950 as a reference point for 'the present.' That date was chosen because radiocarbon dating was invented in the late 1940s.”  This being roughly the middle of 2021, one should add 70 years (+/-) to the date range when the Coosa Side Notch point was known to be used.  While this is far from being the only arrowhead to be used in our area, it does give you a general idea of the possible age should you find one.

Arrowhead core material will vary based on what’s available locally, or by what can be obtained in trade. You may have heard the term “flint knapping”, which refers to the working of the core material by striking to form the desired tool. Inasmuch as there is little or no flint to be found in these parts, we will refer to the process by the general term of knapping.  In addition to flint, chert, quartz and obsidian are used as core material. Obsidian, better known as volcanic glass, is often jet black.  Smaller pieces can easily be confused with coal until one gets close enough to see and feel the smooth, glassy surface. I have found numerous pieces of obsidian near our home in southern Jefferson County, but none near the lake. The neighborhood kids love the black stones for their rock collections, and I am grateful the long dead volcanoes that coughed these pieces up are still extinct.

​Chert is a fine-grained sedimentary rock often used for making arrowheads. While its color can vary from grays, browns, rust-colored reds and even light green, its structure is ideal for knapping.
​The photo below of the arrowheads and chips from the knapping process are all from chert.
Speaking of soil, that which is around our cabin is hardly capable of growing weeds. However, around Lake Mitchell we do have a number of interesting rocks including marble, mica and quartz. The thin soil does make it easier to see what lies beneath.
That brings us to quartz. Geology.com states “Quartz is a chemical compound consisting of one part silicon and two parts oxygen. It is the most abundant widely distributed mineral found at Earth’s surface”, and is highly resistant to weathering.  So it’s no surprise native Americans would have availed themselves of this material.
Our place is on a rise and about 100 yards up from a creek-fed slough that is off Blue Creek, so there’s a water source. There is also a quartz outcropping on the uppermost hillcrest about a hundred and fifty yards away but none in our yard or drive. When we first took over the cabin I used a mower to cut some paths through the nearby woods for the grandkids to run and play on. I noticed when I would use the blower to clear the paths there was one spot where these small white quartz chips would surface, especially after a rain. The same was true for one spot in our hard packed dirt drive.

After the lightbulb finally came on in my head I started looking more closely at these two places.
Hopefully with this information I’ve kindled an interest and it won’t be long before some of you sharp eyed folks will have your own arrowheads (or at least cast-offs) to share.  Good hunting!     ​​​